HERE ARE A FEW EXAMPLES OF NOTEWORTHY RESULTS THAT I HELPED MY CLIENTS ACHIEVE DURING THE PAST 30 YEARS.

1.   I helped a regulatory agency eliminate a backlog without any additional money or people 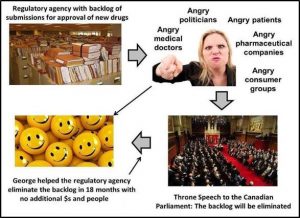 2.  I helped a government research laboratory re-allocate 35% of its research from component development to systems engineering research.

The rationale for this change was that industry needed more support in systems engineering than in development of components.  We applied a customized version of my stakeholder-driven change leadership framework.

To achieve participation and involvement of research managers and scientists, they:

An aside: At an all-staff meeting after the successful completion of the change initiative, the chief executive provided me a recognition award that read “for absorbing punishment from different factions, usually with good humour”.

3.  I was the project manager of a successful large-scale IT project

4.   I played a key role in helping the Canadian Government decide to fund a project to design and build the robotic arm for the International Space Station 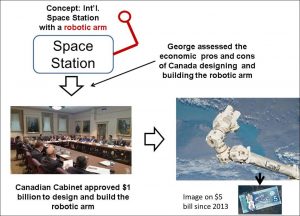 5.   I helped the Chairperson of the Board of a newly created Environmental Agency get Board members on the “same page”

6.   I helped the founder and owner of an accounting firm decide how best to monetize his firm when he retired

7.   I developed and delivered a 12 day leadership program that generated rave reviews such as:

“I feel that I have been extremely fortunate to be a participant in the Five Star Leadership Program provided by Traverse Group.  This program has provided me with a stimulation to continue to grow in my career as a leader in the Public Service. The program itself has been very well put together to build on the five Attributes of a good leader.  From Covey’s “Seven Habits” to Collins “Good to Great”, we covered the attributes of a great leader.  Points from the reading material were reinforced by having participants present topics to the rest of the group, and by doing group exercises. Having 360° assessments done, based on the five attributes was very valuable for me.  Not only were areas for improvement identified, but also areas of strength.  Also, progress could be assessed by having these assessments completed at the start and finish of the program.  Finally, the suggestion to find a mentor was great.  I engaged one of my senior managers as a mentor who is a constant inspiration for me as well as a great sounding board.  The value of a true mentor cannot be stressed too much. At the start of the program, we were told that if we followed the Five Star Program and applied what we learned, we would have a promotion within 2 years.  I fully believe this is true and the only limiting factor is oneself!  I apply the knowledge I gained from this course on a daily basis, with much success!”

8.   From 2006 – 2016, I was frequently invited to be a speaker and / or Session Chairperson at conferences organized by Federated Press.

9.   I have been on the Board of two start-up companies, have coached and advised small business owners, and founded & operated my own consulting firm for over 25 years.  I also helped my wife establish a successful bed & breakfast after she retired from the World Bank as an economist (www.ashburyhouse.com).

I am known for my ability to find solutions, e.g., prior to my consulting career, I solved a very well-known 25-year-old mathematical problem for my PhD (supported by a National Research Council Scholarship throughout my graduate program):

Since then I have helped my clients find solutions to overcome challenges and seize opportunities that were not mathematical (smile) but I often use the same approach – namely, apply the essence of the following two quotations:

The following is a list of some of the articles that I have written, some of which have been published in refereed journals.  .

My article explores the opportunities for stakeholder-driven change leadership.